If there’s even one unexpected silver-lining to the pandemic, it’s been Montrealers enjoying and appreciating outdoor spaces more than ever. Last fall, in anticipation of a long winter ahead, we decided it was the year to take the leap. Instead of just talking about it, we were determined to finally build our very own backyard rink. 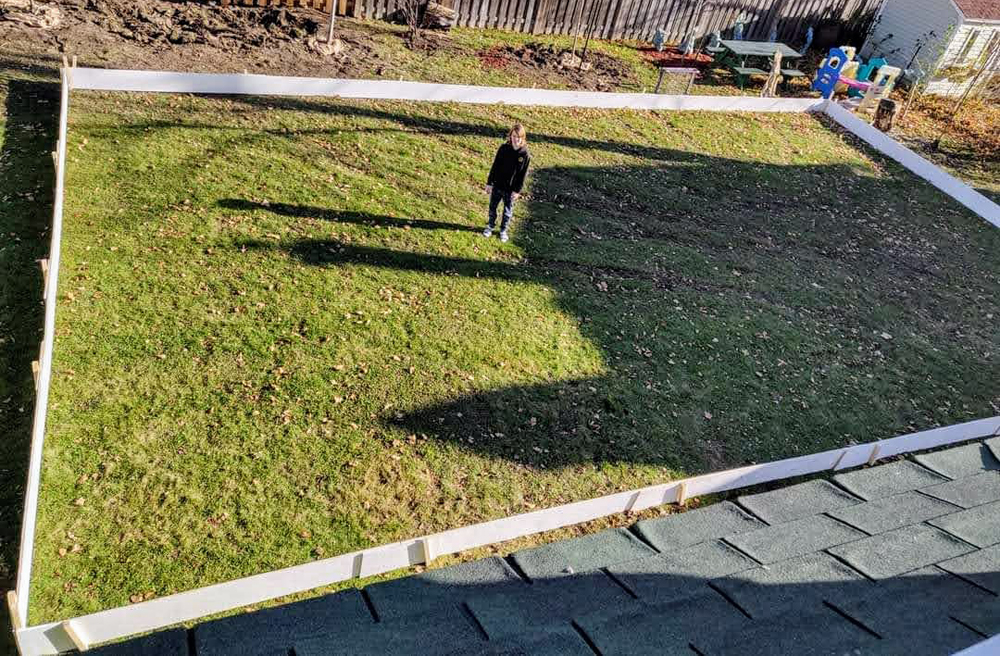 Whether you’re like us and have a young hockey player who wants more ice time, or just love the idea of walking out the door to skate anytime you want, a backyard rink is a great way to enjoy Montreal’s seemingly endless winter.

Building your own space to twirl and play your favourite sport isn’t that difficult, but installing a rink takes some planning, material, chilly weather, and as people tell me: a whole lot of patience.

After setting up the boards for our ambitiously-large rink, us rookies needed some help, so I put out the call to our friends to try and learn from their past mistakes.

Get advice from friends and neighbours

I reached out to seasoned rink-builders Erica Nadler and Mark Mindel, who’ve been setting up a backyard hockey rink at their D.D.O. home for the past four years. With two young hockey players eager for ice time, the rink is used for multiple hours a day as the kids practice their drills and shots.

If you plan on playing hockey, Nadler recommends boards high enough to keep in most pucks. And if you’re close to the property line, you may need something more. “We have to net the top of our neighbor’s fences so the pucks don’t go over,” she says.

Mindel says that putting your tarp down before the first snowfall will save on labour later on. “Our tarp goes down the day before the first snow because it usually turns to rain, and then solidifies, and then my rink is done. Ours is already semi-ready for this year, though I wouldn’t let anyone stand on it yet.”

Maintaining your rink’s smooth surface requires a combination of flooding and resurfacing. The Nadler-Mindel rink is flooded each time the kids get off the ice, and at night they “Zamboni” using a bucket with drilled holes and a towel attached to spread hot water. Important tip: Make sure the hose is attached to a frost-free faucet so your pipes don’t burst.

Lighting and boards are key components

This is the second season that Diane Tetrault and Gary Davis from Baie-D’Urfé are putting together their backyard rink. With dark winter evenings, and a short amount of daylight once school lets out, they’ve mounted lights in a nearby tree and suspended some from a clothesline overhead to prolong their time outside. 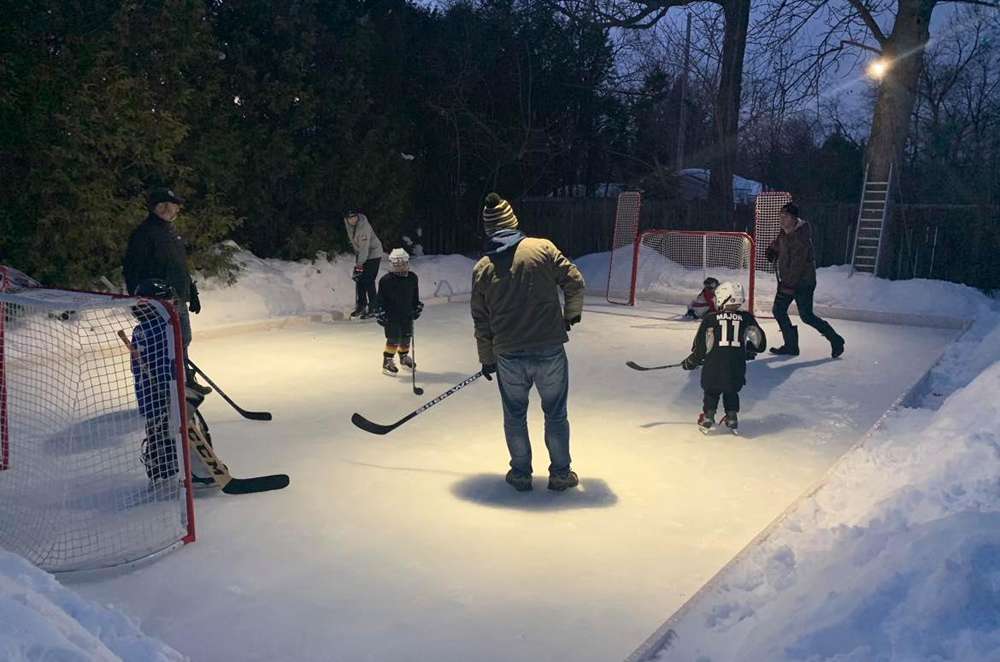 Davis shares his advice on preparing your yard beforehand, and making sure that the rink’s perimeter is sturdy when playing hockey. “If your surface is not level, you might have 10″ of ice on one side and still be trying to get an inch on the other,” he says. “I would suggest wood boards 2” wide by 12” high as a minimum for a basic hockey rink, and higher in areas behind and around a net. Wooden stakes or pegs on the outside of the boards will also prevent your boards from bowing with the weight of the water and ice.”

While a plastic tarp isn’t always necessary, Davis says that using one will allow for a thicker initial flood with less water loss, while a white tarp allows for less ice melt from the sun.

Both families stressed to not let kids or animals on the tarp before the rink is frozen, as sharp claws and boot prints risk ruining the soft ice or tearing the tarp.

Summing up the backyard rink experience, Tetrault says: “There will come a moment for anyone who builds a backyard rink where they think “Dear God, what have we gotten ourselves into?” But, it’s all worth it when you can send your kids outside for a few hours to enjoy the outdoors.”

For those not interested in searching store aisles for the right kind of screws, and cutting stakes in the cold, rink kits can be an enticing option.

Internet is full of resources about how to build a rink

For do-it-your-selfers, the internet is full of advice on all matters relating to ice rinks. The private Facebook group Backyard Ice Hockey Rinks has more than 7,000 members, and you can find plans and videos for building your own resurfacing machines.

What we learned along the way

It’s now a year after our initial foray into DIY rink building, and we’re just about set to start installing the boards again for another season of backyard fun. The rink ended up being my husband’s winter project, and since he’s been working from home since the pandemic started, finding the time to flood the rink almost daily didn’t prove too difficult. 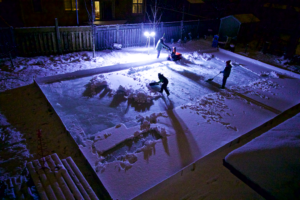 Our finished rink ended up being 30′ x 50′, large enough for a mini game of hockey and for practicing stops, but also a bit too large as we ended up almost running out of room to put the snow that we cleared. A few things we wound up doing were stapling a (huge) white tarp to the inside of the boards to line the sides and bottom. This helped keep in all of the water on warm days. We invested in a snowblower which came in super handy after dumps of snow, and the boys also got in a lot of shoveling practice as they spent evenings shoveling to keep the smooth ice clear.

Is there anything else we’re planning on doing differently this year? Not really! It turned out to be easier than we’d expected and was a great way stay active throughout the winter while so many activities were cancelled.

Now, bring on the cold weather!