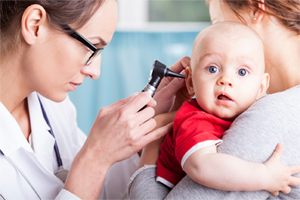 A mild ear infection doesn’t need to be treated with antibiotics if your child is healthy and at least six months old, according to the Canadian Pediatric Society.

The CPS has updated its 2009 position statement on ear infections with the latest literature and antibiotic dosage for effective treatment, but is still encouraging doctors to make sure an ear infection is severe – characterized by a bulging eardrum, among other signs – before prescribing antibiotics to healthy babies and toddlers.

“Many children will get better just as quickly with pain relief as with antibiotics. Side effects are common with antibiotics,” said Dr. Joan Robinson, co-author of the updated CPS statement and chair of the CPS infectious disease and immunization committee.

Ear infections are very common afflictions for children, especially when they’re between 6 months and 3 years old. Most happen when a child is already sick; symptoms may include fever, difficulty sleeping, tugging or pulling at the ears and overall irritability.

The CPS also gives suggestions on how to prevent ear infections: