World-renowned photographer and United Nations global advocate Anne Geddes is taking part  in the Protecting our Tomorrows campaign, which is trying to educate parents about meningococcal disease, a bacterial infection that can cause meningitis (inflammation of the lining of the brain and the spinal cord) or septicemia (an infection of the bloodstream).

Geddes, famous for pictures of babies in whimsical settings, has spent the last year travelling the world to photograph survivors of this disease and compile them in a new book.

Meningococcal disease is found worldwide and there are an average of 200 cases per year in Canada. Symptoms include sudden fever, drowsiness, vomiting, stiff neck and a rapidly spreading skin rash. It must be treated immediately, as it causes death in 10 per cent of those infected.  According to Public Health Canada, survivors can suffer permanent disabilities, including deafness and amputation of the limbs. Among the groups most at risk are children under the age of 5 and teenagers between 15 and 18 years old. It’s almost entirely preventable with a vaccine, which, in Quebec, is recommended at 12 months and in ninth grade.

I spoke with Geddes to find out what inspired her to be part of such a project.

Q. What is the main goal of the Protecting our Tomorrows project? 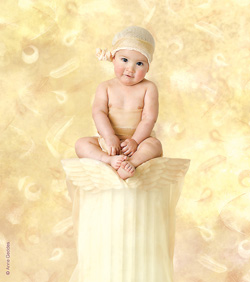 It’s to raise more awareness of menin-gococcal disease across the board. I photographed a girl in Toronto this week, she’s 17, and she got meningococcal disease only a couple of years ago when she was a camp counselor. She said when they got to the emergency department, the doctors started Googling “purple rash” because they’d never seen anything like it before.

The really important message we want to convey is that the symptoms are very similar to that of the cold and flu. But they progress so rapidly that you can be healthy at breakfast and dead by dinnertime. This virus is relatively rare, making it even more difficult to recognize the symptoms. By the time the purple rash appears, you’re running into big trouble.

Parents need to act quickly and decisively; you know your child better than anybody else, and if you think it’s something more than a cold or flu, make sure you jump up and down and get some attention for it. And check with your doctor to make sure your kids’ vaccinations are up to date.

Q. How did you get involved in this project?

My daughters approached me to see if I was interested in doing a series of images of survivors of meningococcal disease. I was a little bit perplexed as to how I’d be able to portray these people; it was very important to me that it wasn’t a campaign of shock and horror (portraying their physical disabilities).

I started with children in Sydney, Australia, and the fifth survivor was 6-year-old Bernadette, whose legs had to be amputated. As soon as she was in front of the camera, I thought: ‘What a beautiful little girl.’ And so many people have commented on her beauty and said they didn’t notice that she didn’t have any legs. That’s what I wanted to get across, that just because she doesn’t have any legs doesn’t mean she’s not a beautiful little girl. And that’s what’s clearly coming through; the disabilities are not defining these children. They’ve got their hearts and souls, and they’re just so courageous and inspirational.

Q. Is there something specific about meningococcal disease that led you to take part in this project?

Not necessarily. I think I’m more of an advocate for children. My husband and I, through our philanthropic projects, have raised a lot of money towards prevention of child abuse and neglect. This was just a natural fit for me; it’s really nice to know that someone may look at these photographic images and decide to have their child vaccinated.

Q. How did you feel when your daughters decided to follow in your footsteps? (Stephanie, 29 and Kelly, 27, are both photographers)

No one was more surprised than their mother (laughs). The girls were growing up in a photographic studio. We lived above the studio. They must have absorbed something by osmosis throughout the years. It’s wonderful to be doing this project with them, to be together and sharing the same energy. It’s just fantastic.

Q. Looking back, is there anything you think you would do differently as a parent?

I’m sure if you ask them (laughs)… because I tell you what, if you ever have daughters, just remember they have very long memories and they bring up every single mistake you made. I think they carry a list around in their pocket. I’m not a parenting expert; I just hope that I’ve done a good job.

Read more about the Protecting our Tomorrows campaign and the new Meningococcal B vaccine in our article A major health scare for 4-month-old baby.