It is hard to believe that the iconic children’s book Alice in Wonderland was published 150 years ago this year. The story has been a part of most childhoods and, to this day, continues to capture the imaginations of young readers.

The story of young Alice, who falls down a hole and into an alternate world, is told with feverish playfulness as Alice encounters all manner of strange characters, including the crazed Queen of Hearts who beheads anyone who disagrees with her, the frenzied white rabbit who is always short on time and the preposterous Mad Hatter and his riddle-filled tea party.

Considering the absurd setting and nonsensical characters of this book, it is not surprising that its author Lewis Carroll and the story have been the subject of countless rounds of speculation and analysis over the years. Many have theorized it is a drug-themed riddle or an ode to Freudian neuroses.

All theories aside, Alice in Wonderland deserves to be honoured because of its cultural significance. It has influenced everything from movies, pieces of art and even rock stars like Jefferson Airplane and Tom Petty. But more than anything, it transformed children’s literature.

Carroll, who was an Oxford academic named Charles Dodgson, was one of the first authors to make children’s literature about escapism and folly, rather than about morals. He wrote from the perspective of a child, letting the imagination run wild and revealing how children see the rules of the adult world as fundamentally nonsensical. As Alice fumbles through Wonderland, her adventure reflects the constant discoveries children make as they try to make sense of the society they live in, and their growing self-awareness of who they are as they approach adulthood.

It is Carroll’s use of an alternate world that allows for the exploration of the child psyche, and it is not surprising that it became one of the most popular literary devices in children’s literature.  The Chronicles of Narnia, Peter Pan, The Wizard of Oz and A Wrinkle in Time, are just a few of the children’s stories whose roots can be traced back to Alice in Wonderland.

On this momentous anniversary, why not rediscover this story with your kids and learn about some of the great books inspired by this story. 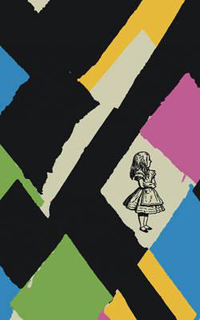 There are countless editions, adaptations and spin-offs of this story but why not go straight to the original with the soon-to-be-released 150th anniversary edition, which will feature a new cover by renowned fashion designer Vivienne Westwood. The book includes the sequel Through the Looking Glass and the original illustrations by John Tenniel. Naturally, the writing reflects a different time, but 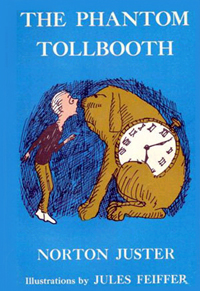 Norton Juster’s book about a young boy who is lonely and bored is still as relevant today as when it was published in 1961. Milo has busy parents and he is often left alone and no longer finds much to be happy about. One day, he comes home to find a mysterious tollbooth in his bedroom. He decides to jump into his toy car and and drives through it. This brings him into a kingdom called Dictionopolis, a world full of lands inspired by tongue twisters, wordplays and more. While there, Milo encounters odd characters, including a dog named Tock who becomes his travel companion, and magical places such as the Doldrums, the Mountains of Ignorance and the Island of Conclusions. Through this journey, Milo makes the discovery that boredom is a state of mind and, as long as he has his imagination, he will never be alone. And like Alice, the most important thing he brings back to the “normal” world is the lessons he learned from his travels. 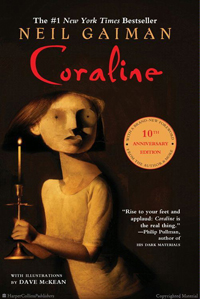 Fantasy writer Neil Gaiman dove into the world of children’s literature with this novel about Coraline, a young girl who moves into an old house with her parents. They find a mysterious door but when her mother opens it, there is a brick wall that leads nowhere. But when Coraline re-opens the door while on her own, it leads into an apartment just like the one she lives in, but with a new set of parents. Everything in the apartment seems better than at her real home, including her “new” parents. As she begins to feel more and more at ease in this other life, it becomes evident that it is not as wonderful as she initially thought. In fact, it becomes increasingly frightening as her two worlds begin to collide. Like Wonderland, the world Coraline stumbles into reflects her desires and fears, but also teaches her that what we wish for may not always provide us with what we need. 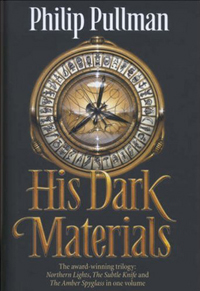 This compelling trilogy consists of the novels The Golden Compass, The Subtle Knife and The Amber Spyglass, and features strong-willed and clever characters. There is Will, who comes from our world, and Lyra, who inhabits a world with slight differences, such as companion animals that take shape around puberty and become inseparable extensions of a person. The story begins with Will finding a portal that transports him into Lyra’s world. Once the two befriend each other, they are launched into an adventure to save the many worlds of the universe, after they uncover a conspiracy to control powerful knowledge. The series delves into themes of power, religion, and the nuances of good and evil. Over the three books, the story moves between multiple worlds. Each has its own unique characteristics, but all are connected by our common humanity. Through the process of Will and Lyra’s travels, readers are asked to look more objectively at our own world and to question more deeply how the world works and the structures that make it up.