When my son was 4 years old, he was obsessed with dinosaurs. The long Latin and Greek names of these prehistoric creatures rolled off his tongue so easily that I was convinced he was a paleontologist in another life. Now, five years on, the plastic dinosaurs have been packed away, replaced by other interests like Star Wars and space. But when our family recently took a trip to what is known as “Dinosaur Valley” in the Badlands of Alberta, we discovered that my son’s fascination with dinosaurs never really died.

As my family and I drove 90 minutes northeast of Calgary, we gazed in wonder as the flat farmlands were transformed into a desert-like environment with canyons, strangely shaped rock pillars and sandstone hillsides. The region is called the Canadian Badlands and, as odd as it seems today, this area once supported lush costal forest and swamps — an ideal dinosaur habitat.

The area is a paleontologist’s dream, filled with fossils and clues to prehistoric life. And thanks to museums, parks and attractions, families can explore the world of dinosaurs in this fascinating area of our country. 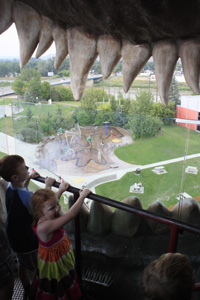 Our first stop was Drumheller, a former coal-mining town that has whole-heartedly embraced its dinosaur claim to fame. Replicas of these prehistoric creatures, dubbed ‘cement-asauruses’ by the locals, are on every street corner, and the kids took delight in pointing each one out.

The town’s ‘piece de resistance’ is the world’s largest T-Rex replica. At 26 metres, it is four times the size of the real thing and impossible to miss as it towers above Drumheller, guarding the town with its fierce teeth. Visitors can climb up the stairs into the giant lizard’s jaws to get a dinosaur-eyed view of the surroundings. My kids found the massive mascot to be the coolest play structure ever, and they had a blast not only climbing into its mouth, but also sliding down its toe. 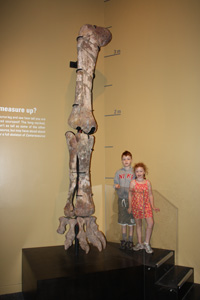 Our next stop, just outside Drumheller, was the Royal Tyrrell Museum, dedicated entirely to paleontology. It’s named after geologist Joseph Burr Tyrrell, who in 1884, stumbled upon the skull of a 70-million-year-old dinosaur. The museum features many impressive displays of dinosaur skeletons, including the Albertosaurus, which though smaller than the T-Rex, was every bit as vicious as a hunter. The museum’s 10 galleries display over 130,000 specimens and the exhibits give visitors a captivating window into the earth’s history before our time.

The museum also offers a Dinosite Tour, where families can search for prehistoric fossil specimens in the nearby hills. It’s a perfect activity for burning off energy and learning about the tough work that goes into hunting for fossils. Our guide explains that bones, unlike rocks, “have a bubble-like texture that looks like an Aero chocolate bar.”

Armed with that knowledge and a laminated fossil guide, we set out into the hills. The adults were just as excited as the kids as we asked the guide to inspect our findings. Though we have a few false alarms with ironstone rock and petrified wood, we end up with quite an impressive collection — a toe bone, a vertebra, turtle shell and a bone fragment, which could have come from an Albertosaurus. 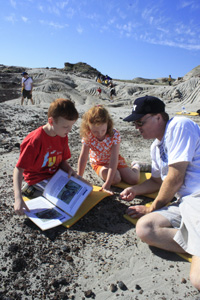 Our final stop was about 100 kilometres from Drumheller; but well worth the drive. Dinosaur Provincial Park is a UNESCO World Heritage Site where 40 dinosaur species have been discovered and more than 500 skeletons have been removed and exhibited in museums around the world.

We have signed up for the Dinosaur Safari tour, which gave us another opportunity to look for fossils. Unlike the Dinosite, we don’t have to search very hard. “You literally can’t step without stepping on a bone,” our guide Erika says. We pass a huge bone that looks as if it should be displayed in a museum instead of casually sticking out of the arid ground.

With our bright yellow kneeling pads, we’re on the ground looking for microfossils. Kids run up to our guide almost immediately and she’s very patient. “Yes, it’s a dinosaur bone,” she says countless times. “Keep your eye out for micro fossils. Look here’s some crocodile scute – bony plates under the skin.” The highlight was finding an actual dinosaur tooth.

After the safari was over, we explored other areas of the park and found ourselves staring at one of the most spectacular sights of our trip. Just off the entrance of the park, from the edge of the canyon, we looked down at the Badlands and take in their rugged and dramatic glory. “Look, there’s an Albertosaurus!” my son joked. Prehistoric history had come alive again.

Accommodations (Suggested B & Bs in the Badlands)

A passion for dinosaurs is common among kids, so if you’re searching for ways to satisfy their curiosity, check out these museums; one in Montreal and two in Ontario.

On the second floor of this museum, you’ll find Triceratops and T-Rex skulls as well as a full-size Gorgosaurus, a prehistoric carnivore. Every Sunday, the museum holds informal, bilingual tours of the museum’s dinosaur collection. The tour is given by the museum’s “Dinoman,” volunteer Bruno Paul Stenson, who has won an award for his work. The tours are free and no reservations are necessary.

Located about a two-hour drive from Montreal, this museum includes a swamp forest exhibit where kids can walk around and watch seven, giant dinosaur replicas moving in very life-like ways. The Talisman Energy Fossil Gallery is filled with information about dinosaurs and other prehistoric creatures.

If a visit to Toronto is on the agenda, don’t miss out on the exhibits at the Royal Ontario Museum. You’ll find more than 350 specimens on display, including 40 dinosaurs with 18 complete or nearly complete skeletons and hundreds of fossils of reptiles, plants and insects that shared the land with dinosaurs. A favourite is Gordo the Barosaurus who, at 27 metres long, is Canada’s largest dinosaur on permanent display.