Airshow takes to the skies in Mirabel

After a decades-long hiatus, Mirabel is once again hosting a major aerial event and the public is invited to get up close with some very cool aircraft. A spectacle for the whole family, the Volaria Airshow takes place on September 24 and 25, 2022 at the ICAR complex adjacent to the Mirabel airport runway.

While aircrafts are the focal point of the two-day affair, Volaria is not solely for aeronautic buffs. Families can enjoy bouncing on inflatables in the Family Zone, and take in a show with Fredo the Magician and Yannick Bergeron, the very dynamic chemist and creator of the magazine Les Débrouillards. Aviation and automotive enthusiasts can explore the open-air museum and its variety of aircraft and automobiles displayed on the ICAR site. 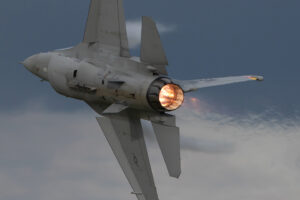 On Saturday evening, Volaria’s signature event will feature a nighttime show combining music, aerial acrobatics and pyrotechnics. And throughout the weekend there will be performances, stunts and aerial acrobatics.

– The Aeroshell Aerobatic Team from Alabama is one of the best civilian formation aerobatic teams in North America.

The festival, conceived and developed by aviation enthusiasts, will also have its own television series — The Volaria program, hosted by pilot Patrick Benoit. The series will be broadcast starting August 26 on TVA Sports and each episode will feature a clip from Canadian astronaut David Saint-Jacques.

Schedule: Events kick off at 12 p.m. on Saturday September 24 (air show at 3:30 p.m.) and at 10 a.m. on Sunday 25 (air show at 1 p.m.).
Location: At the ICAR Complex (12800 Henri Fabre boulevard, Mirabel)
How to get there: The Festival team encourages participants to carpool or use the shuttle available from the Montmorency metro station. Those who wish to come by car must reserve their parking space at the same time as their ticket purchase as spaces are limited. Regular parking will be at a cost of $10 per car. If you are 4 people or more on board, regular parking will be free.
What to bring: Be sure and bring folding chairs, your camera, binoculars, sunscreen, and water. Parents may want hearing protection for young children.
Pricing: Admission prices vary depending on whether you purchase daily or weekend tickets. General and Premium Zone tickets are free for children from 0 to 6 years old and at a reduced price for children from 7 to 17 years old.

More information and tickets are available at volaria.ca.