Home / November 2014 / Acrobatic show with focus on food at TOHU 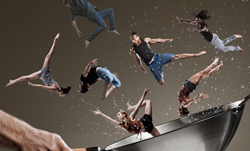 So much of our personal narratives revolve around food. The food that was cooked for us, the meals that brought us together —the stories we tell—the ingredients of our lives. In this spirit, Cuisine & Confessions, the latest creation by the performance company, Les 7 doigts de la main, is a culinary feast of storytelling, acrobatics and of course—food.

Carefully choreographed and precisely timed feats of highly technical, stupefying acrobatics are combined with the artists’ personal narratives and the preparation of a meal to create a dynamic performance that will be remembered long after the last crumb of banana bread is gone.

The show began the moment the audience was called to take their seats. The artists, wearing aprons, roamed the theatre inviting audience members onstage to help with preparing ingredients for the meal. Some audience members sliced, while others mixed and all were given a tour of the kitchen. The artists didn’t make the audience do all the work, however. During the show,while they danced, spun, flipped, jumped and flew through the air, they were also peeling bananas, cracking eggs, pouring and stirring.

At one point in the performance they cooked an omelet for an audience member, without ever ceasing to move, contort, tumble and dance.

The show was structured by the artists’ personal narratives. Each artist told a story and had a moment to have their skill set highlighted in a solo performance. The stories revealed the artist’s connection to their family through food, featuring particular memories or demonstrating the role food played in the early years of their life.

The artists alternately spoke English, French and Spanish, but it didn’t matter if you understood these languages because their tale was recounted through the movement of their bodies.

Although one or two artists were highlighted in each narrative, the rest of the cast often participated in the background. At times it became difficult to know where to focus one’s attention because there was so much going on at once. It felt as though by looking in one direction you were missing out on something else. It was nearly impossible to see everything that was going on.

The acrobatic feats were astounding in their complexity and skill. In one act, Melvin Diggs and Sidney Iking Bateman jumped, tumbled and flipped through several wooden frames stacked on top of each other at different heights. For the act’s finale, Diggs tumbled through a frame stacked over seven feet high. He knocked the frame on his first attempt but undeterred he successfully completed the trick on his second attempt, to the audience’s wild approval.

Other performances of note were Anna Kichtchenko’s incredible aerial routine and Matias Plaul death-defying skill on the pole.

When the show was finished the artists produced perfectly baked loaves of banana bread and rolled out trays of desserts done by artist Danica Gagnon-Plamondon, which the audience was invited to taste.

In a spectacle that was as jaw-dropping as it was delicious, Cuisine et Confessions, left its audience well-satiated and likely to come back for seconds.