A simple birthday gift to suit all kids

My kids get invited to a lot of birthday parties, which can be a blessing and a curse. Kids love going to parties and, as a mom, you want your kids to be happy. But the cost of all those birthday gifts… ouch! I have two boys, age 10 and 12 and they go to about five or six parties a year. One day, I sat down and added it all up: those birthday gifts were costing me $500 a year.

And it wasn’t just the cost that bugged me. I also felt obliged to “keep up with the Joneses” and spend what other parents were spending, or at least appear to. This meant standing around in toy stores a lot, staring hopelessly at the shelves, trying to find gifts that looked expensive, but weren’t. A $25 gift (what I wanted to spend) looked cheap, while a $50 gift looked barely adequate. Plus, you spend $50 on the perfect gift and who knows? Maybe the kid already has that toy. Or maybe they’re not going to like it. Or maybe they’ll love it, play with it for 10 minutes and then never pick it up again. It just seemed like such waste of time and money.

Three years ago, I came up with the perfect solution: money. It might seem boring or too practical to some but, from my experience, kids love it. I usually give them a dollar store toy too, just so they have something small to open. The first year I did it, it felt weird sending my kids off to parties with an envelope of cash, but I persisted. It just felt right. The second year, two or three other moms in our little circle started giving money instead of gifts as well. And now, three years later, everyone is doing it.

My son, Sam, had a big birthday party last month. Eight kids came and not a single one brought a birthday gift. Instead, Sam received a total of $210 in cash. He was thrilled. Oftentimes, a big ticket item that would not be in the family budget becomes attainable for the child with a wad of money. Also, by giving money, kids have the opportunity to learn about saving, spending and charity. 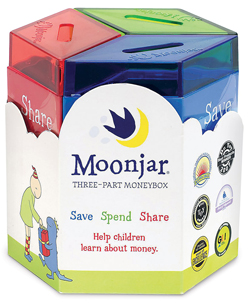 I bought my kids Moonjars when we started giving them allowance a few years back. This piggybank has three diamond-shaped metal boxes, bound together with a sturdy yellow rubber band – one for spending, one for sharing and one for saving. (You can purchase them at some local toys stores like Art Enfant on Sherbrooke St. in Westmount, or online at moonjar.ca).

“They are a really popular item in our store,” says Liz Leggett, who works at Art Enfant. “Parents ask for them all the time. They really help kids understand the concept of money.”

I give my boys their allowance every Friday. They get $10 in loonies. This gives the money a pirate-like appeal, plus it makes it easy for them to divide their loot into spend, share and save. But now, they were doing it with their birthday money too.

After the party, Sam and his brother Leo took their “spend jars” and dumped the coins and bills on the carpet. Together, they had $180. Loot in hand, we hopped in the car and they spent a heavenly half hour walking up and down the aisles of Toys “R” Us, considering all their options. In the end, they decided on a gigantic LEGO set and still had money left over for another shopping spree.

When Sam’s party was over, I asked him what he was going to spend his money on. “I’m going to give $50 to charity, spend $40 on toys and put $120 in the bank,” he said. My eyes filled up with tears, I was so happy he was talking about giving money to charity AND putting some in the bank. I guess the Moonjar I bought was well worth the money.