A review of the book Wonderstruck

In 2007, author/illustrator Brian Selznick gave the world of children’s literature a groundbreaking work entitled The Invention of Hugo Cabret. Told in equal measure through words and drawings, the story involved an intriguing mystery set in turn-of-the-century Paris about an orphaned boy trying to build a mechanical robot while living in a train station. The book found a loyal following, and was brought to the big screen by Martin Scorsese this past winter.

Selznick’s strength as an artist lay in his ability to combine prose and illustrations to create a full-fledged children’s novel with an intricate plot, well-developed characters and a satisfying conclusion. Now, he has once again used his creative genius to give readers another gem of an illustrated novel entitled Wonderstruck (Scholastic Press, $29.99, ages 8 to 13).  In the book, readers jump back and forth between two stories, one set in 1977 about a 12-year-old boy who has just lost his mother, and another set in 1927 about a young deaf girl from Hoboken, New Jersey. 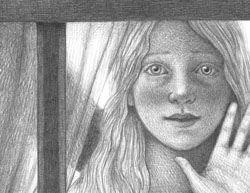 Like in his previous title, which paid homage to the creative genius of cinematic innovator Georges Melies, Selznick once again draws on the people and places that have influenced his artistry and imagination and brings them into the story. In this case, the city of New York and its Museum of Natural History play starring roles in the plot. He infuses them with a special kind of magic that ignites in readers their own curiosity to discover these places and experience that same sense of wonder.

Selznick made a wise choice in making Rose’s story the illustrated one, as his charcoal black and white illustrations perfectly suit the era of the 1920s. He captures the beauty and mystery of Rose’s silent-movie star mother and the twinkling lights of New York City’s Times Square. Also, the silent beauty of the illustrations help the reader understand Rose’s world as a deaf child.

The book is satisfyingly thick, yet reads with ease, which will give children a wonderful sense of accomplishment when they reach the end. Selznick has certainly struck the world of children’s literature with his wonder of the illustrated novel, a genre that we can only hope he will continue to develop.