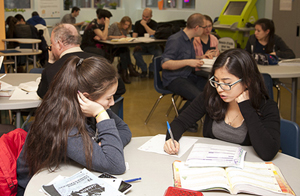 It’s no secret that dismally low graduation rates have been a persistent topic within our province for some time now. What’s more, research has revealed that behind this phenomenon is an even more entrenched societal issue: poverty.

In 2013, a study by the University of Quebec in Chicoutimi revealed that a geographical divide predicts graduation rates in Montreal: those who lived east of Decarie Blvd. were twice as likely to drop out of high school than those who lived west of it. Though there are numerous factors at play, one contributor was clear: the poorest boroughs boasted the highest dropout rates.

To help combat this problem, Toujours Ensemble, a community centre in Verdun, began a partnership with Pathways to Education Canada, a national program that aims to help students from low-income communities graduate from high school and go on to post-secondary studies.

The program was the brainchild of Carolyn Acker, who was the executive director of the Regent Park Community Health Centre in Toronto. She wanted the children of Regent Park – one of Toronto’s poorest neighbourhoods – to one day become the centre’s doctors, nurses, social workers and administrators, and used research to create a program to keep them in school.

Across the country, 16 community centres currently offer the Pathways program, and three of those sites are in Montreal: Toujours Ensemble in Verdun, the YMCA in Point St. Charles and the Carrefour Jeunesse Emploi in Lachine.

“We often hear people talk about (dropouts) as being a school board issue, but that masks more contextual issues like poverty and economic disadvantage that are often at the root,” says Robin Dalton, director of evaluation and learning with Pathways to Education Canada. “At the school board level you get a mix of higher and lower incomes, because the school board serves a vast territory, but once you start targeting specific communities with higher economic disadvantage, you’ll be more likely to effect change.”

The program is intended for those who are the most in need. They choose students from economically depressed neighbourhoods and then scout prospective participants by visiting Grade 6 classrooms to introduce the program to students before they enter high school.

Participants have access to free after-school tutoring in a variety of core subjects, and financial help such as money for school uniforms and books or scholarships to pursue post-secondary education. They also take part in group activities to teach social skills, problem solving, career planning, creativity, and they work with a counsellor who acts as a mediator between the student and his parents, the family and the school. The students are followed throughout their secondary school career.

Dalton says one of the keys to the program’s success is that it is delivered through local community centres that are already well established in their areas. “We want to maximize the use of other resources in the community and connect youth with them,” she said.

Toujours Ensemble in Verdun was the first site to offer the Pathways program in Quebec eight years ago. In 2006, the high school dropout rate in Verdun, one of Montreal’s most economically disadvantaged boroughs, was a staggering 41.8 per cent; considerably more than the city’s 26.5 per cent.

The program currently serves about 250 students. Sixty per cent of last year’s graduates are now in CEGEP, and 14 per cent obtained a work-oriented training certificate.

Aisha Haddoud is now an alumna of Verdun’s Monseignor Richard High School. But when she was in Grade 9, her parents separated and she started getting bullied at school. “I didn’t feel like going to school but (Toujours Ensemble) was always there, they would talk to me and call me and made sure I was OK; when I had trouble at school and repeated a year they helped me catch up.”

Haddoud said she took advantage of the free tutoring offered through the program, which helped her pass core subjects such as French and math. “I was winning prizes for perseverance,” says Haddoud about her experience. “So that made me feel like I should continue, they helped me a lot.”

Haddoud also received help paying for her books and school uniform. She says that without the help she received from the program, she’s certain she would not have graduated from high school. Two years after graduating, she is now studying business management at CEGEP André-Laurendeau.

Dalton says they are looking at developing alumni activities and networking events in order to keep tabs on the graduates. While she and her colleagues are happy about the students’ success, she warns that the issue of poverty and inaccessible education is far from being resolved. “We’re encouraged and optimistic, but we’re very cautious, no one wants to oversell the success. We want to keep our nose to the ground to make sure the program is constantly changing and getting better in terms of the difference it can make.”