A new way to explore nature through technology

There is a new way for kids and parents to learn about the plants and wildlife in their neighbourhood thanks to an “Urban BioKit.”

On June 13, this e-booklet was launched at the Eureka Festival in the Old Port of Montreal. Basically, it is an interactive application that allows children to wander around the city while learning about the biodiversity of their neighbourhood, iPad in hand.

Pan-Canadian print BioKits have been around since 2010, but this is the first time that a digital version is available. With this interactive e-booklet, children learn about biodiversity in any neighborhood park. The booklet has questions, like “how many different types of trees are around you?” and children must check off their answer, take photos, etc. Before the digital version was available, the amounts of activities possible were limited—children could only write and draw. This new version makes things even more interesting. They can still do everything they did in the print booklet, but now they can also document their trip with photos and videos, and even share their final projects with family, friends, and teachers.

The application was created by CREO, a company that creates and develops products that aim to make science fun, and NTEO Studios, which makes interactive documents. Environment Canada’s Biosphere and the Société de formation à distance des commissions scolaires du Québec (SOFAD), which specializes in e-learning, also took part in the project.

After a short presentation on the BioKit’s features and history, elementary-school students were able to try the application. With the help of an animator, they walked around the Old Port, and were able to learn about the surrounding wildlife and plants thanks to their newly downloaded apps. The animator had added a few artificial animals to the scenery in order to make things more interesting, and a few real birds came by for a visit. Although it was raining (the iPads had protective plastic covers), the kids seemed to have a good time. They were able to take photos and draw what they noticed, take quizzes, and learn tips on how to protect the environment. Once the children were done with their activity, they were able to send their work to friends, family and professors. 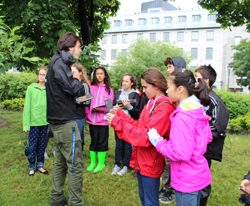 You do not have to be in the Old Port to use the Urban BioKit; a child can use it at any neighbourhood park in the country. It is also available in a print version, which can be downloaded on their website, for those who do not own iPads. The activity lasts about 90 minutes.

This project was initiated in 2008 by Environment Canada’s Biosphere. Since then, 12 different print-format BioKits have been created to help Canadians learn more about nearby parks and cities. The Urban BioKit is the first one to be available in a digital, interactive version.

On July 1, Parc National de la Mauricie will launch its Nature BioKit for the iPad. Print versions will also be available.

Urban BioKit is available for a free download at mybiokit.com.