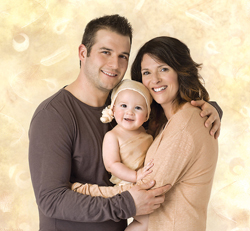 When 4-month-old Matteo woke up with a high fever one day in September, his parents, Chantal Bergeron and Dominic Perricone, managed to control it with medication throughout the day. But by the end of the afternoon, Matteo was pale and had begun vomiting. When his mother changed his clothes, she noticed her son had blue spots on his stomach.

“I saw them and thought: ‘This isn’t normal,’” Bergeron recalled. She and Perricone took Matteo to the emergency room of a St. Jean-sur-Richelieu hospital, but it was overcrowded with patients.

Luckily, Bergeron bumped into a paramedic she knew and when he saw Matteo, he was concerned enough to ask a nurse to examine him right away. The nurse alerted a doctor, who diagnosed Matteo with meningococcemia, an acute and potentially life-threatening infection of the blood stream.

Matteo was given his first round of medication in St. Jean-sur-Richelieu and then transferred to Ste. Justine Hospital in Montreal where he spent a week in intensive care. “The (doctors) kept telling us that the first 48 hours are critical,” Perricone said. “He could have died overnight. But the first treatment was really effective; it got rid of almost all the bacteria in the body. Another 15 minutes could have changed everything.”

Matteo is one of the lucky ones; he has a bit of scarring but otherwise has fully recovered. His parents acted quickly enough that skin grafts weren’t needed, nor was the amputation of any of his fingers or toes, which can happen with this disease.

He stayed in the hospital in Montreal for about two weeks and when he was back home, his parents had to clean his wounds every day for a month.

Bergeron said she was happy to take part in the project Anne Geddes was working on to help educate others. “For us, it was to raise awareness,” she said. “Parents around me tell me that when their kid has a fever, they think of us and our situation. I think it’s important to recognize the symptoms and act quickly. It’s also such a gift to have these photos of him, as a reminder that he’s still with our family.”

New vaccine for Meningococcal B

In December, Health Canada approved Bexsero by Novartis, a meningococcal B (MenB) vaccine for use in individuals from two months through 17 years of age. It is the first broad coverage vaccine to help protect against this strain of the disease and can be used for infants, toddlers and adolescents. MenB infection is the leading cause of meningococcal disease across Canada, particularly in infants. Although rare, this disease is feared as it affects healthy people rapidly and without warning.

“The MenB vaccine is designed to reduce the risk of disease in those most at risk and provide parents with peace of mind,” said Dr. Ron Gold, Senior Medical Advisor of the Meningitis Research Foundation of Canada and retired Chief of Infectious Disease at The Hospital for Sick Children in Toronto. “The new MenB vaccine has the potential to fill the last remaining gap in vaccines to prevent all of the major causes of bacterial meningitis outside of the newborn period. I encourage parents to talk to their doctor about meningitis and how they can protect their children with vaccines. I also hope that the new MenB vaccine will rapidly be added to the routine immunization programs throughout Canada.”