A furry canine completes the family

They finally broke me. After years of intense lobbying, constant negotiations, hours of research and a fair bit of whining, my 9-year-old twin daughters got the dog they have been asking for since they were 3.

My husband and I were worn down by their relentless and studied efforts. Over the years, the girls have taken out scores of books and scoured the Internet for information on dogs and spent hours discussing appropriate names for potential canine companions. While other little girls played imaginary games of family, our daughters played “family of dogs,” complete with mother dog, puppies and owners.

Meanwhile, my husband and I debated the pros and cons of dog ownership. To be honest, we’d come to the conclusion that there was no logical reason to get a dog. It would be another body to feed, groom and care for. Dogs are messy creatures, coming in from walks with wet, muddy paws and fur that sheds. They need regular walks each day and their poop must be scooped. And they need to be put in kennels if the family travels.

The truth is, unless you require a service dog or own a herd of sheep, you probably don’t “need” a dog. You get one mainly because you want one that will love and adore you.

Attracted by that notion of doggy devotion, I started imagining our hypothetical pet, envisioning a noble beast that would accompany us on hikes and snowshoe trails. He would also be content to lie by our feet next to the fire but still ready to leap into action should a child fall into a well (as they do in those romantic tales of canine love). Sort of Lassie meets Old Yeller. 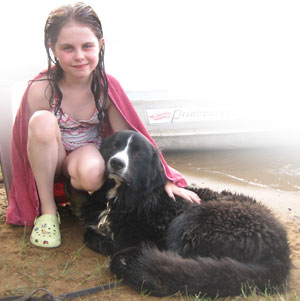 What we got was Jasper.

Half Bernese Mountain dog, half Labrador Retriever (as far as the lady at the SPCA could tell), he’s a shaggy black bear of a dog with a white stripe between his eyes and down his snout, and a ruff of white fur on his chest. He is a sweet, extremely affectionate 9-month-old goofball with no idea he is too big to sit on people’s laps.

Our girls couldn’t be more pleased with the newest member of our family. They were absolutely beside themselves when we brought Jasper home in June to meet them. We know they will never, ever forget the moment they stepped outside and saw this funny-looking puppy, his head cocked to one side in curiosity at the three girls staring at him, and realized he was theirs to keep.

They feed him, brush him and take him out for walks. The older girls have taken on the scooping duties without complaint. Even Maya, our 5-year-old, has fallen in love with the dog she hadn’t actively lobbied for over the years. Together, the kids have taught him how to sit and shake hands. When they watch television, he stretches out with comical pleasure so the three of them can pet and scratch different parts of his enormous body.

Not everyone is pleased

Unfortunately, our other family pet, Caramel the cat, is not so happy with the new addition. Caramel refused to acknowledge our presence for the first two weeks after Jasper came home. He withheld the purring and lap-time snuggles he had previously lavished upon us so willingly. He reserved the most withering and accusatory glances for me, as if to say, “Why? We had such a good thing going…” It doesn’t help that Jasper watches his furry counterpart with the same playful enthusiasm he displays for a tennis ball or juicy stick. We can’t really blame Caramel for expressing disdain and dismay.

And it’s true that Jasper, like all of us, is very much a work in progress. Although he is mostly good on a leash, a passing cyclist or random crow flying overhead can send him lunging forward with the excitement of a puppy and the shoulder-jarring strength of a small horse. He likes to chew sticks as he canters down the road with us, but occasionally chooses eight-foot long dead pine trees to drag along behind him.

But Jasper is also teaching us new things along the way. Our girls know that they must drop whatever they are doing when it is time to feed him or let him out to relieve himself.

And then there is power of affection and love. When we went to pick him up from a kennel after a summertime camping trip, Jasper heard our voices from outside and commenced the most hilarious kind of keening, a sort of low half-bark, half-yowl. When he was brought out to see us, his whole body literally quivered with joy. We all welcomed his doggy kisses and antics. And it was hard to know which one of us was the happiest when we all got into the car to take him home. He is family now, loved despite all shortcomings and welcomed into our life.