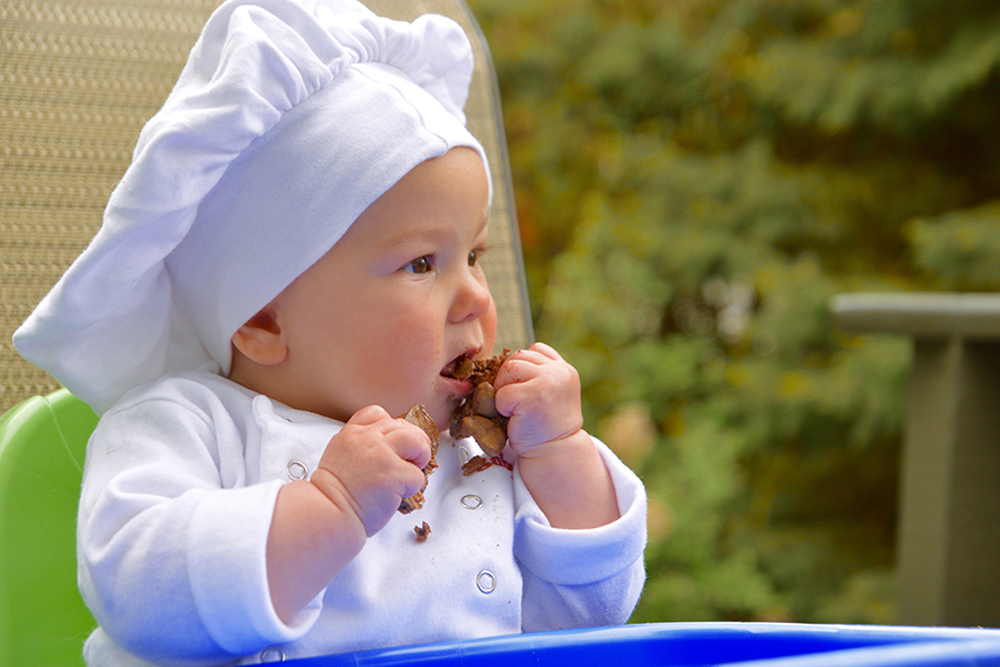 When it was time for Jessica Coll to feed solid food to her daughter for the first time, she decided to pass on the purées and baby cereal and opted instead for chicken liver. “It is important to focus on foods that have a lot of iron,” said Coll, who is a registered dietician. “Also, cooked chicken liver falls apart easily and is easy for a baby to swallow.”

After chicken liver, which she said her baby seemed “very curious” about, Coll began sharing baby-appropriate pieces of whatever foods the rest of the family was eating, including omelettes, baked sweet potato, avocado, and other soft-cooked meats and vegetables.

Coll said while many people spoon-feed babies tiny bites of rice cereal or mashed banana, it’s not necessary to buy or prepare separate ‘baby’ food. She said it’s better for babies to feed themselves big pieces of soft-cooked food they can pick up with their hands. This approach to first foods, called baby-led weaning, allows babies to explore the tastes, textures, smells and sight of food while gradually learning how to feed themselves. When babies feed themselves, said Coll, they improve motor skills and instinctively learn how to chew and swallow as they become developmentally ready for solid foods.

Purées, in contrast, are typically swallowed without chewing. A 2009 study published in the journal of Maternal Health and Nutrition found that babies who are mainly fed purées are more likely to reject food with more taste or texture later on.

The study found that the babies who were introduced to lumpy foods after 9 months remained pickier, eating fewer fruits and vegetables at age 7 than babies who began at 6 months.

Coll also noted that parents can easily overfeed babies by finishing off a jar of food instead of stopping when babies indicate they are full. In contrast, babies who feed themselves are more likely to stop eating when they have had enough.

According to Coll, babies can begin exploring foods in a high chair or on the parent’s knee starting around 6 months, when he or she can sit without being propped up. Parents don’t need to worry about how much food is being eaten at this age as babies should continue to get most of their nutrition from milk. The Pointe-Claire dietician has been giving workshops on baby-led weaning for five years, incorporating the approach into her advice to private clients and teaching nutrition workshops for parents of babies between the ages of 6 and 12 months. She also began training other dieticians when she could no longer handle all the requests for workshops herself.

Coll now maintains an online list of more than 20 dieticians across Canada who she has trained to provide advice on baby-led weaning. She also offers an online course for parents and a free baby-led weaning cookbook with healthy recipes for the whole family to enjoy.

While some parents worry about babies choking on larger pieces of food, new research such as a recent study of 184 New Zealand families published in the Journal of Pediatrics last fall, indicates that baby-led weaning does not cause more choking than spoon-feeding. Coll said it is just important to ensure the food is soft and not sticky.

Parents used to be told to hold off on introducing potentially allergenic foods, but Coll said the current advice from Health Canada is to introduce them any time after 6 months. Common allergens like eggs, fish, nuts, wheat, soy, milk, sesame and seafood should be introduced one at a time, or in combination with other foods that you know your baby is not allergic to. Spices and herbs are also fine for babies.

“However, you wouldn’t want to give a dish like pad Thai to a baby because it contains egg, shrimp and peanuts,” Coll said. “If the baby has an allergic reaction, you won’t know what it is from.”

While parents do need to pay attention to which foods are safe for babies to eat, when it comes to introducing solid foods, the best thing to do is relax, expect a bit of mess, and as much as possible, include your baby in family meals.

Preheat oven to 400F. Add all ingredients to a large bowl and mix to combine. Form mini burgers about 1/3 the size of adult burgers, approximately 4 cm in diameter (1.5 in) by 2 cm (¾ in) in height. Place on a baking sheet covered with parchment paper and bake for 20 minutes. Let cool and offer to your baby. Makes 14 burgers.

Which foods to start with?