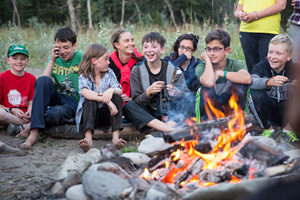 When Trevor Klingenberg was 17, he started to find eating a chore, had abdominal pain and such little energy that he could no longer play hockey and soccer. After several tests, he was diagnosed with Crohn’s disease, an inflammatory illness that affects the bowels and digestive system, making it extremely difficult to keep food down.

Despite knowing that there is no cure for his condition, the Montreal teenager says he tries to have a positive outlook and live life as normally as possible. But because of the nature of the condition, it can be an isolating experience and embarrassing to talk about with friends.

So when his parents received an email from Crohn’s and Colitis Canada informing them about Camp Got2Go, a sleep away camp in Nova Scotia for young people between the ages of 9 to 17 living with the same health condition, Trevor jumped at the opportunity to attend.

Helen Silbiger, manager of patient services at Crohn’s and Colitis Canada, said because everyone at the camp, including some of the staff, has the illness, campers feel more comfortable sharing their experiences.

Trevor said that everyone is either going through or has been through the same experience. “Campers and counsellors can talk with each other about their stories, give advice, and grow closer with one another,” he said.

One in 150 Canadians suffers from Crohn’s or ulcerative colitis. Symptoms include abdominal pain and cramping, trouble eating and frequent trips to the washroom, which make regular everyday activities seem daunting. “Because of the symptoms, going to a regular camp is impossible for most of these kids,” Silbiger said.

The camp is located at Brigadoon Village, a centre that accommodates various weeklong camps on a rotational basis for children with chronic conditions like visual impairment and kidney disease.

It is fully equipped with health facilities where nurses can administer feeding tubes or other care for those who require extra medical attention. Because of the severity of their condition, some campers have had parts of their intestines or bladders removed, resulting in the need for ostomy, a type of prosthetic system which helps the body get rid of waste.

Menus are also crafted with the campers’ dietary restrictions and allergies in mind. 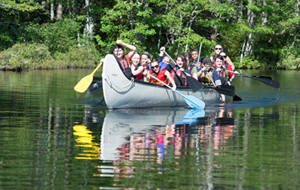 Due to the high volume of applications, a second location outside of Bragg Creek,  Alberta called Camp Horizon was opened in the summer of 2015. The campers at both locations participate in a broad range of activities like volleyball, arts and crafts and archery.

Silbiger says they try to accommodate the camper’s physical and emotional needs and it helped Trevor cope better with his new condition. The following summer, he returned as a volunteer, and hopes to do so again this summer.

Applicants must submit medical forms indicating they are healthy enough to attend. Approximately 65 campers are randomly selected; however, priority is given to first-time applicants. The camp receives funding from the pharmaceutical company Jansenn Inc. to cover the cost of flying in campers who are not within driving distance of the respective locations.

The camp has a “pay-what-you-can” policy for parents and Crohn’s and Colitis Canada covers the rest to ensure that kids are not turned away because of their financial situation. Applications, along with medical forms and a 200-word essay explaining why the child wants to attend the camp, must be submitted online by May 1. The Western camp session runs from July 24 to 29, and the Eastern camp session from Aug.14 to 19.