Never underestimate the power of a great story. The sound of a human voice telling a tale has been known to calm and enthrall children as well as adults. In our family, with three kids between the ages of 4 and 8, story CDs are a welcome part of car rides, quiet times at the house or those “we have nothing to do” moments that tend to strike in late winter. Here, for your listening pleasure, are some of our favourites: 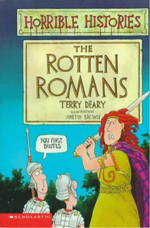 Horrible Histories series
by Terry Deary (BBC $17.95, ages 7 and up)
Thanks to British author Terry Deary, history comes alive in memorable detail with this series that includes The Rotten Romans, The Stormin’ Normans and The Savage Stone Age. The clever stories, lively music and irreverent (sometimes gruesomely funny) humour draw kids into these tales of the past. You can be sure listeners won’t soon forget what happened during the time of the Black Death, for example. Just keep in mind that sensitive children might actually be frightened by some parts, so screen it first if you aren’t sure. 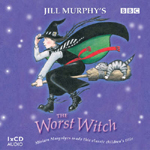 The Worst Witch
by Jill Murphy (BBC, $16.95, ages 7 and up)
It’s Mildred Hubble’s first term at Miss Cackle’s Academy for Witches, but nothing is going her way. Mildred can’t control her kitten, her broomstick or her spells. Then she stumbles on a plot against the school and her bad luck manages to save the day. Originally published more than 30 years ago, the book offers a plucky, determined heroine whose adventures continue in other CDs including The Worst Witch Strikes Again, A Bad Spell for the Worst Witch, The Worst Witch — All At Sea. 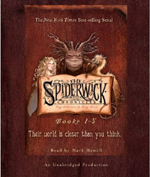 The Spiderwick Chronicles
by Holly Black and Tony DiTerlizzi (BBC, $24.95, ages 7 and up)
This enthralling series follows three siblings who move into their Aunt Lucinda’s ramshackle old Victorian house and discover a secret library. There they stumble upon a book called Arthur Spiderwick’s Field Guide to the Fantastical World All Around You and this is when their adventures begin. The Spiderwick Chronicles is due out this month as a film, but the audio CDs are a less overwhelming introduction to the books, especially for younger children.

Fairy Tales Forever
by Eric James Wolf ($19.95, available at www.fairytalesforever.com, all ages)
Storyteller and child psychiatrist Eric James Wolf believes strongly in the power of stories to change lives and his enthusiasm draws listeners into these magical worlds. He offers engaging, contemporary twists on some well known fairytales. However, some stories are more suited for ages 7 and up, because the themes explored might not be understood or appropriate for younger children (the loss of a parent, for example). Wolf also offers a free podcast, which you can subscribe to on the website listed above.

Uncle Wiggly’s Storybook (photo above)
by Jim Weiss (Greathall Productions, $14.95, ages 3 and up)
Master storyteller Jim Weiss has been captivating audiences for more than 25 years. On this CD, he brings alive the kindhearted, resourceful rabbit gentleman, Uncle Wiggly Longears, found in stories by Howard R. Garris. The tales are full of gentle lessons and laughter as a clever, courteous rabbit ingeniously helps his animal and human friends. Weiss’s CDs — and there are many — are among our family’s favourites.

If you are searching for these titles, you have several options. The Canadian website Fire the Imagination, www.firetheimagination.ca, carries many of them, particularly ones produced by the BBC. The site was started by a Canadian family and offers books, CDs, DVDs and toys.

Local independent book and toy stores often carry audiobooks. If they don’t have a particular title, ask if it can be ordered.