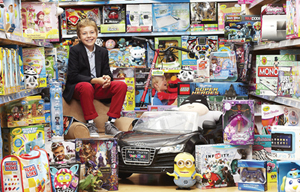 With Alex Thorne set to retire in December 2015, Toys"R"Us, Canada is on the search for its next Chief Play Officer (CPO). Apply at www.toysrus.ca/cposearch until October 4, 2015. (CNW Group/Toys "R" Us (Canada) Ltd.)

Émile Burbidge says the first shipment of toys to arrive at his door came in a giant box hauled out from a really big truck. The 12-year-old boy from St. Bruno de Montarville on the South Shore said the box was so big that even the delivery person was curious about what was inside.

The box contained some of the newest toys fighting for a place on store shelves and ones that may end up in your home if Émile does his job well. His new gig is what Toys “R” Us calls “the best job” ever (and really, it’s hard to argue with that title).

As the company’s new Chief Play Officer, or CPO for short, Émile was chosen from more than 150 kids from across the country who applied to test out toys and decide which ones are must-haves. “It’s like being president of happiness,” he said.

His parents helped him come up with the concept for his audition video, which lasts about two minutes and in which Émile is stationary for approximately 20 seconds. He then swings into the frame, revealing a photogenic tween with big brown eyes, a mop of hair and a cartoonish voice, making him seem much younger than he is. He then takes the viewer on a tour of his life in toys, from his baby playthings right through to video games. He speaks both French and English, hops around on a bright yellow pogo stick and plays the Toys “R” Us jingle on a guitar. He’s a star.

Months later, he received an email saying he’d been chosen as one of the finalists, and had to travel to Toronto for an in-person meeting. He had to talk to the interviewers about the hottest toys for Christmas and he prepared like any serious job seeker would – learning everything he could about the toys so he could make the best pitch.

“I felt confident, honestly,” he said. “I remember thinking that I’m going to walk out of the building and be the CPO in two months.”

Victoria Spada, manager of public relations for Toys “R” Us, has been on the panel to choose the winner since the company created the position in 2009.  She says Émile commanded the room from the moment he walked through the door.

“He walked in like we were all equal and said ‘OK, I’m going to be your next Chief Play Officer and here’s why.’ It was unforgettable for us because it was something we hadn’t really seen before,” she said.

Showcasing his varied interests, from gymnastics to cars, his endearing personality and contagious smile also helped seal the deal, she said.

His parents informed him he’d won the competition in a way that will sound familiar to fans of a certain fictional chocolatier: they wrote him a note saying he’d won and hid it inside a chocolate bar, gifted to him on Valentine’s Day.

“It was like getting the golden ticket,” he said, referring to the story of Charlie and the Chocolate Factory when five children who find golden tickets in their chocolate bar wrapper are granted access to the factory.

So far, he’s done toy training with vendors at the head office, where he learns about various toys and then they are shipped to his house for testing. He says his friends told him he was a shoo-in for the job and he’s planning on inviting them to test out the toys with him.

He says he likes everything about the job, including travelling, doing interviews and meeting new people. His life, he explained, is pretty normal outside of his CPO duties. When it comes to the ever-elusive work-life balance, Émile, who is in grade 6, makes it seem pretty simple. “I do my homework and then I play,” he said.

He has a one-year contract with a possibility for renewal and every CPO so far has had their term extended, Spada said. The CPOs are compensated for their time but the company keeps the terms of the agreement confidential.

While he spends his time testing new toys, Émile’s favourite toy is decidedly old school – his pogo stick, the one that he used in his audition video.

Discovered in his basement when he was 7, it had belonged to one of his sisters but is now his greatest treasure.

He loves it because he can jump as high as he wants and do tricks, the perfect pastime for a boundlessly energetic kid. He even has a personal best – 1,202 jumps, a record set two years ago and that he hasn’t been able to match since. “I wasted a lot of time [to set the record], but I had a lot of fun,” he said.

He says that although he looks forward to all the testing, he isn’t convinced that any of the toys will replace his number one favourite.  “You never know… but for now, I’m sticking with the pogo stick.”