10 ways a father can bond with his son

At some point during my six years as a mother, I realized that no matter what I say or do, my two boys will inevitably, instinctively even, look to their father when they aren’t sure how to react to any given situation in life. Why? Because he is a male. He and my sons share those male chromosomes, the extra testosterone and the same anatomy.

But it isn’t always easy for dads to know how to connect with their sons. Robert Enright, a Montreal psychotherapist, says that fathers (and mothers too) face enormous stresses in their lives as they juggle demanding jobs, long commutes, financial worries, etc. “It can be a challenge for a dad to be really present for his children,” he says.

However, Enright says he hears from men who truly want to make that connection. The following are suggestions that may help dads forge a strong bond with their sons.

Tell them you love them (even if you didn’t hear it growing up.) Tell them why you fell in love with their mother. Show them that love is a powerful thing and that it’s okay to feel such a strong emotion. And accept your son for who he is, not for who you think he should be or what you want him to be. “Get to know his likes, dislikes, habits, quirks,” Enright says. “Help him grow into who he is.”

Teach your son the importance of health —taking care of his teeth, eating right, exercising, and going to the doctor on a regular basis. Enright, who started yoga when his son was young, is delighted to see his offspring now practicing headstands and other yoga poses. “Show your son that healthy living is an integral part of your own life.”

Teach them about every sport you know. Go to a park and kick a soccer ball around. Teach them what a lay up is. Show them the fun side of the sport, not only the competitive and strategic side.

Take them camping and sleep under the stars (even if it’s just in your backyard), go for nature hikes (find a walking stick along the way) and look for birds or trees you can identify. Go fishing!

Show your son that you are open to trying new things. Go kayaking or visit a museum. Eat purple carrots. Expose your son to various cultures. Knowledge helps build confidence and seeing different ways of life and other points of view make us all a little more understanding.

Teach your sons the importance of being social even if you’re not terribly social yourself. Tell them that the key is to ask questions. Keep the conversations going by letting other people do the talking. Being able to carry on a conversation and communicate effectively can make life a lot easier in social and professional situations.

Enright says this can be biggest challenge for many fathers. “You can be home but so distracted with other things, like technology, that you aren’t really present,” he says. As hard as it can be, build in some down time. It’s in those quieter moments when sons are likely to open up and talk about what is going on in their lives, their hopes and dreams, and their ideas for the future. Listen to what they have to say.

Make sure they know that what they say matters. Put the paper down, ignore the phone, and stop texting for a few minutes. Turn off the television and listen. Make eye contact. Let them know they are important, so they will feel confident that they matter. As an unknown author wrote, “Every father should remember that one day his son will follow his example instead of his advice.”

Give them the power to be able to take care of themselves because mastery builds self confidence. Start with the basics: how to do laundry, clean a bathroom and cook at least one meal. It doesn’t matter if all you can do is slap together a peanut butter sandwich. Teach them that and then learn together how to cook something new.

Buddha said, “Success is not the key to happiness, happiness is the key to success. If you love what you are doing, you will be successful.”

Help your sons find their passion. Enright says he remembers taking his 11-year-old son, who loved music, to see an organ concert. His son met a professor from McGill who arranged for organ lessons. Today, his son has just completed a PhD in music and is starting a career as an organist. He encourages fathers to do whatever is necessary to help their sons pursue their dreams and ambitions,  even if dad doesn’t know anything about that field or area of interest.

The author Toni Morrison once posed a question to all parents, “When your child walks in the room, does your face light up?” Be aware of your face when you see your child and make it light up like you’ve just won the lottery. Show him that he matters, more than anything.

Looking for a new “adventure” to share with your son?
See the homepage of our website for an amazing calendar of activities
that lists hundreds of things parents can do with their kids.
So if you are planning to take your child on a new “adventure” this
weekend, check out our calendar, click on a specific date and
there will be several activities to choose from.

Local dads share what they love to do with their sons 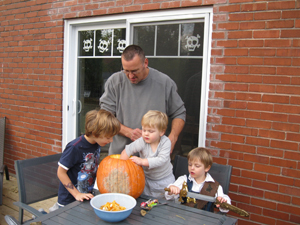 Sometimes, it is the little things that count the most. Having three boys has made me realize that a bit of one-on-one time with each is vital so I try to do that as much as I can. However, when that isn’t possible, I try to create magical moments with all three of them that are full of love. One of the simple things I do is spend 15 minutes of quiet time out on the deck after dinner. Yes, the deck chair is crowded and at this time of year we can see our breath, but it doesn’t matter. I find my largest two coats, slide the patio door closed behind us, cover up the boys and settle into a time of cuddles and stillness.  We share our thoughts and listen to the night. In those moments, I am reenergized as a father and I cherish the gifts that are my sons. 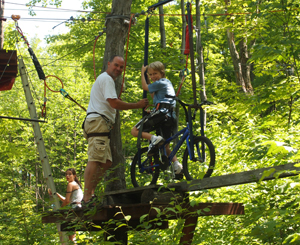 My son and I like going to Junior A hockey and university football games because they’re more accessible in many ways, not just in terms of dollars and cents.  The whole atmosphere is less intense so it lets us focus a little less on the game and a little more on each other.

I also love to cook and I’ve enjoyed getting Owen involved over the last couple of years.  He’s graduated from doing simple tasks like spinning lettuce — and all too often just sitting around banging on pots — to helping with the preparation, cutting, and assembly of the meals. This past fall, he was hard at work with me in the garage as we dove into seven bushels of fresh Roma tomatoes and canned 120 litres of super tomato sauce.

We also love spending time outdoors. Whether it’s skiing, tobogganing, swimming, fishing or enjoying less traditional activities like tree-top adventures, we both live somewhat vicariously through each other.  Besides taking some risks and experiencing our own personal thrills, we get a charge out of participating in each other’s wins and losses.  It kind of doubles the fun for both of us.

The good, not so good, and even boring — according to him — times I spend with my son is all worthwhile.  I think it all boils down to the freedom to do things he might not get to do with anyone else and the comfort of knowing it’s all going down under the Big Dog’s watchful eye. Priceless. As a father, I’ll take that for as long as I can get it.

I have built a backyard hockey rink for the past five years with my boys. Each year it has developed into a more elaborate project — now I even have lights set up so that we can see each other when it gets dark, higher boards so that the puck doesn’t fly into the snowbank, etc. It is fun to just hang out with them after dinner while doing something we all love. The boys continue to develop their hockey skills and I see that they are becoming much more proficient skaters than me! We also host a hockey tournament in January or February where my son’s friends come over and compete for medals. It is usually three on three hockey. We have a lot of fun and create wonderful memories at the same time. (For information about how to build a hockey rink, go to http://blog.participaction.com/ participaction/en/?p=7) 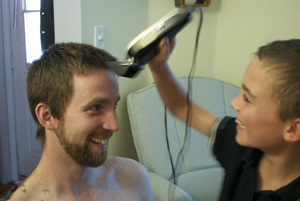 My son and I love the winter. When I was a child, I would spend hours playing alone outside, building quinzees (which is like a snow fort meets an igloo), and I’ve passed that love on to my son. It’s something special we look forward to each year. Once the snow is deep enough in our backyard, we make a small mountain, pat it down, and dig it out, making a hollowed-out dome. We poke a few air holes; find some sheets of cardboard to lie down on, and voila — a secret winter hideout! We shuffle through the small entry hole to lie down and tell stories, imagining what it would be like if we lived in the far north with polar bears. When we get too cold, we’ll join my partner inside to thaw out our fingers and toes, or move on to something a little more active.

I picked up hockey thanks to my dad when I was a teenager, and my son loves joining me now that he’s getting quite adept on the ice. He’ll skate after me, laughter filling up the outdoor rink while he tries to show off. Hockey gets the adrenaline going and gives me the chance to teach my son the rules of the game — so it’s a great physical and mental activity.

We’ll also go for walks in the Morgan Arboretum in Ste. Anne de Bellevue to look for frogs in warmer months, and learn about the trees that make up Montreal’s forests. I’m a scientist and I’m encouraging my son to ask questions about the world around us. I hope I’m keeping his curiosity alive, and building a strong bond with him all at the same time.