Did you know the Scots were instrumental in constructing the Lachine Canal and were the first to build a bridge across the St. Lawrence River? Or that when the Don de Dieu sailed up the St. Lawrence to colonize Quebec it was piloted by a Scotsman? Or that McGill University takes its name from James McGill, a Scot?

The Scottish-Quebecois connection runs deep and is rooted in a rich history, especially here in Montreal. So naturally every summer for nearly four decades there has been a Highland Games event.

This year is the 38th edition, which will take place on Aug. 2 at Arthur-Therrien Park in Verdun. The games give Scottish-Montrealers a chance to celebrate and explore their heritage while visitors of all backgrounds are invited to discover and share in the culture of Scotland.

This is the first year kids will have their very own mini games; children will be able to jump and play in bouncy castles, dress up in highland costumes, get their faces painted and watch as professionals re-enact a medieval battle. 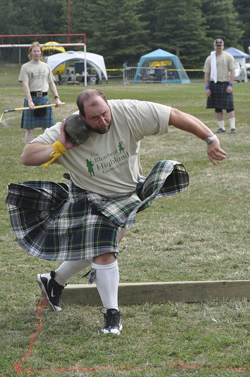 As is tradition, spectators will be privy to heavy weight competitions in the caber toss, sheaf throw, hammer throw and putting the stone – which all require impressive displays of strength – as well as highland dance and pipe band.

For shoppers, there’s a Celtic village where you can find a wide variety of Scottish jewelry, clothing, musical instruments, baked goods and so on. And if you get hungry, there will be plenty of food to chow down on while listening to Celtic bands Salty Dog Montreal, Squidjigger and Kitchen Party.